A Not So Neighbourly Feud 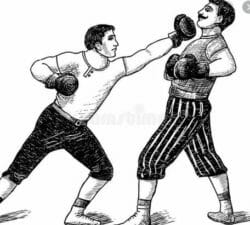 These poems were written about Paddy Cassin, his wife Annie Holton, and their disagreement with their neighbor, John Hornby. The incident occur on July 18th, 1906 and John Hornby filed an assault and battery charge against Patrick Cassin, for which he was later found guilty and had to pay Mr. Hornby, $20. Father Hugh is Father Hugh McGrathy, the Catholic priest of Valcartier during the time.

Some farmers loaf around the courts, or lug the rod and line
The proper time to save your hay is when the sun doth shine
Dark clouds they are a-gathering, soon heavy rains may spill
So I’ll tell you of two champions who boxed on the Mill Hill.

Those champions of Valcartier shouldn’t wear the ball and chain
Out there I own a patch of land and there I heard the game
While home on my vacation on those islands mowing hay
This news so true, I’ll tell to you I heard on Saturday.

On the eighteenth of July, my boys
Those tidings came to me
Two farmers and their loving wives did sorely disagree.
John had confused Annie’s waterworks and played some nasty game,
Don’t aggravate your neighbour’s wife or you may get the same.

The very first blow that Paddy struck
The bully ran away, then like a gamecock
Paddy knew for he had nobly won the day.
Said he was the largest quadruped that ever chewed a cud.
The battle was a dirty one, more talk in it than blood.

It happened here not long ago,
Some preachers did combine to stop the sale of Whisky
Or the storekeepers they’d fine.
They went before our council, a petition they did lay
They swore it was a scandal to so break the Sabbath Day.

Oh Father Hugh, it wasn’t you, who put out whisky down
For I know how kind you treated me; last spring when I was down
You know it was the Lord’s delight to see his friends in glee
For once he made three extra pots of wine at Galilee.

Oh Father Hugh, what can you do
But pray to make amends,
Just open up a big saloon
And invite the boys to attend,
Teach them to settler their disputes
With knuckles on the green, and never in a court house,
Let one of them be seen.

My hay is cut and in the barn
And I must take the train,
I won’t know how this suit comes off
Till I come home again.
But Paddy made old Kruger run
As one night he outdistanced me,
And when I get to old Quebec
I think I’ll have a spree.

Those cannibals may eat me
Or lock me in a jail,
But Doctor Rose or Miss McCoy,
Will get me out on bail,
I have confessed, give me a rest,
Excuse my crippled hand;
We’ll drink a toast to Paddy,
Long may he plough and sow the land.