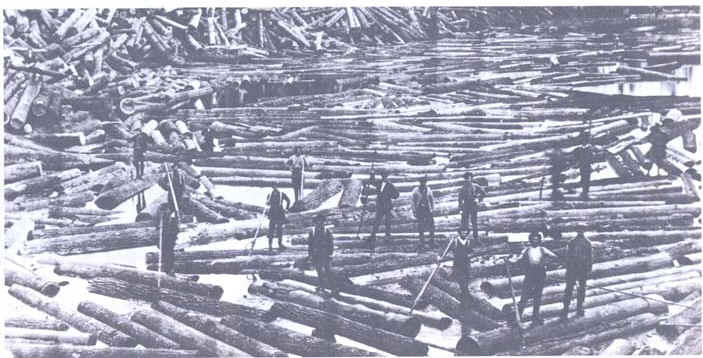 by Bernie Monaghan and Michael Corrigan

In the late 1800’s, a pulpmill was established in the town of Donnacona, which is situated on the north shore of the St. Lawrence River, a short distance from Quebec City. The vast forests of the Jacques Cartier water shed was the source of wood for the fabrication of paper. Huge quantities of wood would be cut during the winter months and hauled by horses to the Jacques Cartier River and its tributaries, awaiting the drive which took place in the spring. The amount of wood cut each year would vary, depending on how much they purchased from the farmers who owned bush lots along the way. This wood was hauled and then piled on the ice where it was measured by the scalers of the company.

The company had constructed a large dam on the upper Lake Jacques Cartier, creating a huge reservoir of water, 9 miles long, which kept the river moderately high during the driving season which usually terminated in mid­summer..

River-driving was a hazardous occupation and many a man lost his life breaking log jams and fording dangerous currents. Some of the lumberjacks, when logging was over, remained for the drive. The company would always provide the drivers with a wagon and team of horses to portage their boats, tents and supplies in order to avoid dangerous currents and falls.

The swift waters near St. Catherine’s , known as Mulroney’s Rapids, were considered one of the most dangerous as they were very long and the water ran swiftly with many protruding rocks adding to the danger.

During the course of one particular drive in the early 1900’s, two huge driving-boats were approaching Mulroney’s Rapids and the occupants were in a mood for adventure. The first boat was manned by Percy Montgomery and Alley Cartwright with Edmund Kiely at the helm. The second was led by Joe Guy, with John Hurley of Lake Beauport and another driver whose name we can’t recall.

Percy, who related this story to Michael Corrigan, said that he was never afraid with Edmund in control as he considered him to be an expert boatman. The decision was made by Edmund to shoot the rapids and declared that their boat would go first. Joe Guy and his companions followed. It is better to leave the trip over the rapids to the reader’s imagination, ­sufficient to say, that nearing the end of the run, the drivers in the first boat looked round and saw Joe Guy’s boat overturned with Joe and one of his companions clinging to its sides. At this point Edmund noticed Hurley bobbing in the water beside him. He quickly grabbed him by the hair of his head and hauled him in to safety with some lively remarks. (Edmund’s vocabulary was not exactly that which would be used by a nun.) Happily they were all soon safe on shore.

Driving on the river was discontinued several years ago, and at this writing in 1989, the company has been taken over by Domtar Inc. All their wood is now being trucked