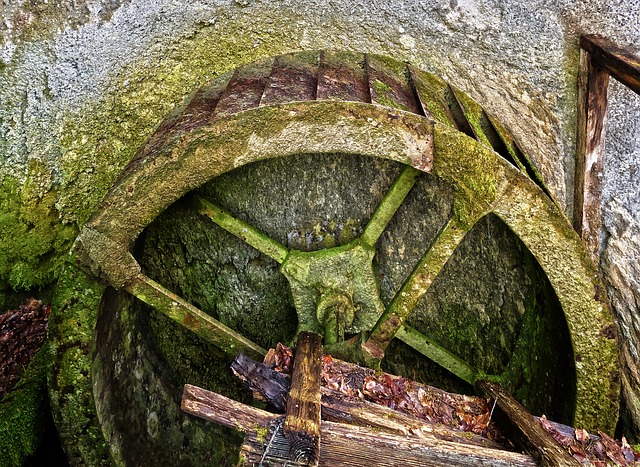 As Valcartier was settled in the early 1800’s, most of their buildings were log structures and the logs were squared by swinging the broad axe.

From what can be found of the existing structures, this work was skillfully done as was evidenced by the Sacristy of St. Gabriel’s Church which was con­verted into a presbytery in 1986. The square timbers had been perfectly hewn and is one of the oldest, if not the oldest building in the vicinity.

The first mills in Valcartier were built along the streams and were water-powered. John Navin appears to have owned a mill on the Nelson River in the early 1830’s as we have records that he sawed the wood surrounding the fence of the first Catholic Chapel in 1839. This mill seems to have been taken over by Henry Hicks, a boiler maker by trade, In 1841 or 42. This may also have been a grist mill and thus the surrounding area became known as the Mill Hill. To residents on the West side of the Jacques Cartier River at that time it was known as the far Mill Hill, while what is known today as Todd’s Bridge, Hill & Stream, to them was known as the Near Mill Hill, because of a series of mills erected along the stream. After George Todd Settled there in 1866, it was known from then on as Todd’s Hill.

The settlers West of the River petitioned the Government of Lower Canada to erect a water-driven grist mill on the stream now known as Todd’s Brook. This project was realized in 1829 and Adam Leithead (pronounced by the early residents as Leteed) became the first miller. It appears to have been a rather large mill for the times, possibly it was intended to serve the re­sidents on both sides of the river, as a wooden bridge was erected across the Jacques Cartier River in 1833. We believe it was built on the piers that are still visible today in low water. This bridge was almost completely destroyed by an ice-jam in 1836 and was condemned in 1831. So for about thirty years the river-crossing was done by ferry between Wolff’s landing and William Neilson’s property, later owned by Samuel Clark until a second wooden bridge was built on the same piers in or about 1870, as my father, Albert Monaghan, who was born in 1861, used to tell about crossing on the scow to attend church and catechism lessons. This bridge was replaced by the present Iron Bridge built in 1891. Incidentally, Adam Leithead is said to have been the victim or a fatal accident in the Settlement, being thrown from a run away horse coming around the bend or the road at Lake Ferre in front of where the Presbyterian Manse stands today.

While the Municipal Records or the Municipality of St. Gabriel West go back to 1818, the Municipality was actually formed in 1861 and their first Session was held in January of 1862, but the records up to 1918 must have been lost over the years, consequently there is no record of the building of the first bridges; possibly they have some record in the Records of St. Gabriel East. Patrick Cosgrove was Mayor in 1918 and died while still in office. The building of the Iron Bridge is well detailed and with Government aid, both Municipalities contributed to its erection.

Going back to 1829, several years later a sawmill was erected on the same stream by William Neilson. This mill was sold later to George Todd & John Simpson, his brother-in-law. The sawyer for Todd’s mill Joseph Pierce. Later on, on the same brook a sawmill was built and operated in the 1890’s by Messrs. James & John Goodfellow. The remains of this mill can still be found on the stream.

Further up the stream, above where Majella Murphy lives today, Charles Fitzpatrick owned and operated a water-powered sawmill and did a considerable amount of sawing. He was assisted in this work by two of his sons, Charles, 1856 – 1876 and Edward, 1860 – 1882. His daughter Mary, later Mrs. Henry Loughren, who was born in 1861 used to tell about drawing back the carriage of the mill assisted by one of her sisters, helping their father in his work. He sawed the wood for his house which was built in 1861, and as it was an elaborate house for the times was only fully completed in 1868. Johnny Murphy eventually bought the property, Married to Teresa Fitzpatrick in 1906, settled there and raised his family there. It still belongs to the Murphy family. Needless to say the mills on that stream could only be operated in High Water as there was no reservoir at the head of the stream to control the flow of water. In the early 1930s Wilfred Lang and Simmie Murphy discovered the remains of an old grist mill on one of the streams flowing down Pinkney’s Mountain; the mill stone was still in good condition.

Patrick Hayes owned and operated a water-powered mill on the Riviere-­aux-Pins, this mill was in operation for many years and the mill was taken over by his son Robert who kept the mill running until the late 1930s, when the property was sold to Theodore Perreault, a big contractor who acquired the cut of many bush lots and carried on a big operation until 1947. Eugene Leduc of St. Raymond then erected a lumber mill on the Hornby Property in 1937; he eventually sold the operation to Adrien Drouin, who came from St. Agathe de Lotbiniere, who carried on the operation until 1947 when he moved the mill down to Valcartier Village. This operation lasted only a few years.

John McCartney used to have a portable mill on the Fourth Range driven by a gasoline motor in the mid 1940s, he later sold to Joseph Griffin of Shannon.

A miller by the name of Ouelette had a sawmill and did a considerable amount of business further up the Riviere-aux-Pins. Also a Mr. Cliche had a mill behind Bill Conway’s. Further up the Gosford at Lake a I’Isle a sawmill was built and operated by David Lemay of Charlesbourg in 1938, this operation was taken over by Mr. Kilgour, an American. Joseph Martel had a mill on the Northwest side of the Riviere-aux-Pins, powered by steam, while he used to saw some lumber, it was principally used in the manufacture of wooden shovels.

Mr. Cliche operated a portable mill to saw a cut of wood he had purchased from Jim Mclaughlin along the Riviere-aux-Pins road in the winter of 1946-47. A certain Mr. Talbot operated a cord wood mill on the Lake Hayes Road about at the same time.

There used to be a mill on the Cassion River on McGrory’s property and I understand the remains are still to be found there. I believe the proper name of this river is “Cassin”, being named after the Cassin Family and the name appears misspelled “Cassion” in several of the old records. The Cassin didn’t always enter the Jacques Cartier where it does today. The property originally belonged to Frederick Kack. They were known as the wealthy Kacks. According to some old-timers they did not have much confidence in banks and used to lend money out to local people at high rates of interest. as often happened some of the borrowers were unable to pay the interest so they used to work for Kacks to pay it. The Cassin River used to flow down through the farm, that is the lower section known as the Point and enter the Big River there, so about 1870, Mr. Kack in the autumn of that year, called on some his debtors the trees and dig a trench running straight to the river, then when the high water arrived in the spring it opened the channel to the river where the Cassin River enters the Jacques Cartier today.

The Kack property was later owned by Joseph McGrory. Mr.McGrory lost his father early in life; he was the victim of a fatal accident while work­ing as a long-shore man in Quebec City . As his mother remarried and Kacks had no children, he was adopted by them and subsequently inherited the pro­perty. The old people used to say that he bore the name of Kack until his marriage to Mary Jane Cullerton in 1888.

Simon Kiley had a water-mill on the stream which flows through part of their property. I understand it is the outlet of Lake Vente Rouge. They used this mill to saw the lumber for their farm buildings.

Thomas Thompson owned and operated a lumber mill, run by steam on the First Concession. During the expropriation of 1914, he moved the mill and set it up on the Valcartier Road on the spot where Matton’s store is today. At that time it was situated in the Municipality of Loretteville. It was in operation until the early twenties, when it remained idle for a few years. Joseph Asselin bought the operation in the late twenties and dealt in lumber until the mid-thirties.

A certain Mr.. Lefebre owned and operated a mill in the Settlement in the 1880’s until 1903. Then it was rented to Henry Billing in 1904, who ran it for a short time and finally it was sold to Alfred Lepire in 1905. During Lefebvre’s tenure the mill burnt down and was rebuilt. Lepire ran the mill until his death in December 1933. While Lepire had it, it was burned down and rebuilt each time. This happened twice while Lepire owned it. This mill was then owned and operated by Augustin Paquet, when it was again destroyed by fire in 1940. It was soon rebuilt, this time it was powered by a gasoline motor instead of steam The mill and property were sold to Henri-Charles Leduc in the early 1940’s and completely renovated and enlarged, the old system being sold to Charles Boyd and the new mill was powered by electricity. The mill again burnt down in the late 1950’s and rebuilt with the help of the residents and operated until about 1970. Charles Boyd used to run the little gas-powered mill occasionally un­til his death in 1976. The little mill was purchased by Lome Monaghan and set up near Stewart’s Kack house which he had bought a short time before. He did some spare-time sawing for local people and sold the mill to a Mr. Sioui of Indian Lorette about 1980. This was the last sawmill in Valcartier.

I mention here some mills that were erected near the Shannon-Valcartier line as they used to serve some of the people of Valcartier. Toutins mill situated near where Leo Floyd lives, Clear’s mill further up, which mill is said to have sawn the ties for the Gosford railroad and finally a mill owned and operated by Archie Tope. These were all steam-powered mills.

Today in 1986, there is not a single mill within the limits of the community, and as far as we can ascertain there were twenty-seven over the years. This is chiefly because of modern transportation, huge trucks can convey vast amounts of logs and pulpwood to distant mills where automation has taken over, also the forests can be denuded in a short time with modern equipment.