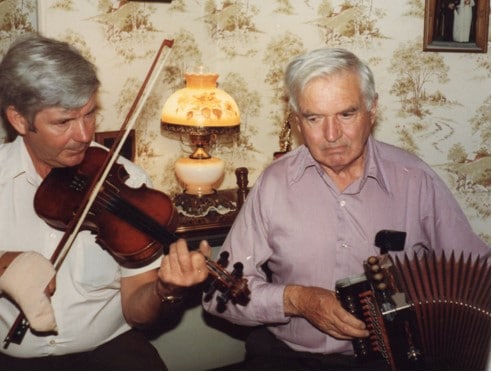 Eric Corrigan, on fiddle and Bernie Monaghan, on accordian

The taste for traditional Music had declined among our young people to a point where they didn’t want to hear it anymore (it had reached its lowest ebb about 1980). About this time, there appeared on the scene a young violinist named Lisa Ornstein, from the United States, Ohio to be exact, who has been instrumental in the restoration of the folklore of Valcartier. At this writing in 1984, Lisa has taken up residence in Quebec, has learned to speak French, and has now her own music school in Quebec City. I can safely say that Lisa is one of the finest musicians I have ever heard and at her request I will here endeavor to enumerate a list of all the musicians we can recall from this area, from early times until the present.

Among the musicians that played for the dances in the early days I have heard such names as Jacques Paquet, who played the violin in Riviere aux Pins.  He was a native of that area but his birthplace was Stoneham. Other musicians who entertained before I was born were: Edward John Shea, fiddle, certain gentlemen by the name of Cassin, fiddlers, Prosper Theberge on the Fourth Range, Paddy Kelly, also a fiddler ofnote and there were undoubtedly many others.

I will here give, a list of the musicians that entertained during the 1920s and 30s up to the present day. Some of them may not have been experts but they did their share to preserve the traditional music as we know it, today. The accordion made its appearance on the scene at the turn of the century and was played extensively in Valcartier. So far as I have been able to ascertain the accordion was invented in Germany in 1821 and has since spread all over the world. One of the most widely used accordions used in this vicinity was the Gagné, accordion manufactured by the Gagné Bros. in Quebec City. They began making accordions in 1901, and are still making them today, although the present owner, Paul Gagné, who is now in his sixties, tells me that he believes the craft will die out as neither of his two sons are interested in the trade.

On what is today known as Valcartier Boulevard. Auguste Paquet, fiddle. Bazil Banning, piano and accordion, David Banning, accordion. Joseph. M. Hicks, accordion. The ladies of the time were quite fond of music as a goodly number of them played the piano and organ. Norma Hicks, Mrs. Ida Hicks, Mrs. Irene Banning, Mrs. Alice Lavallee, Mrs. Lorraine Boyd, to mention but a few.

There may be more who have been overlooked, but you see how popular traditional music was in the past.

Dancing was always popular in the past. We had lot of good tap dancers years ago. I remember William Smith, George Murphy, Harold Kack, just to mention a few.

Among the most popular folk dances in the olden days were the Quintillion and the Quadrille. The waltz was also popular, then came the Lanciers which was one of the rare folk dances to be danced by Royalty.  Finally, there was the American Set which was brought from the United States by Owen McLaughlin. Owen immigrated to Boston from County Tyrone, Ireland in the 1870’s, while the other members of his family had come to Canada. On the death of his brother, Frank in Canada, his parents wrote to him in Boston asking him to come and take over the family farm, and he introduced the American Set to the young people of Valcartier. The Set was the most widely danced because it could accommodate a greater number of people. The Caledonia was sometimes danced, it was introduced from Scotland. Another dance which is sometimes danced is The Drops of Brandy similar to the Virginia Reel, danced in the United States.

The American set consisted of six parts: The first part was called, the Lead Up, followed by First Balance, then Second Balance, Ladies Chain, First Gallop and the Big Gallop. A great variety of different tunes could be played for the set, while the Lanciers had to be danced to special tunes.

A lot of the credit for the preservation of the Lancier tunes must go to Keith Corrigan, a native of Valcartier now living in Ste. Foy, a master of the accordion. Keith has often played on radio and T. V. and played with Jean Carignan’s Orchestra to Her Majesty, Elizabeth II, on the occasion of the Royal visit to the Canadian Olympics in 1967.

In the Valcartier of today the guitar is the most popular instrument and some of the young people are quite accomplished. They have a local group who are devoted to Western Music, headed by Roger Lamont, and give Western Shows at different times of the year.