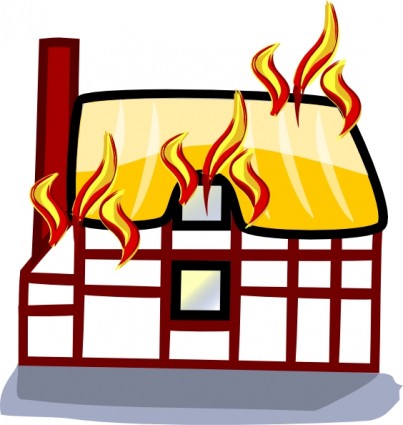 During the summer of 1914, there was a long, hot, dry spell of weather. In early July, the streams, wells and springs were low and some were almost dry. The earth was like a tinderbox. At this particular time in early July, the farmers had begun harvesting their hay. One evening , Lawrence Corrigan had just emerged from his barn after unloading some hay, when he noticed smoke billowing from the barn of his immediate neighbor, Richard Douglas. (These people lived in the upper end of the Fifth Concession).

The alarm was soon spread and the neighbors rushed to the spot where the barn was engulfed in flames. The barn was situated on the east side of the main road, close to the Corrigan line and the house on the opposite side. Fortunately the wind was blowing from the west and all the efforts of the volunteers were concentrated on saving the house. While water was scarce, there were still some pools in a small stream close by and water was carried in buckets and pails and dashed against the house, which by their efforts they succeeded in saving. Michael Corrigan, who was seven at the time, well remembers Benny Cartwright, a youngster at the time, doing his share along with the men.

Cinders were borne by the wind for a considerable distance and started a fire on the roof of Pat Corrigan’s barn. This fire was immediately extinguished with a pail of milk. As stated earlier, water was scarce.

Mr. Douglas was able to store the hay he harvested that summer in an out-barn belonging to Lawrence Corrigan. He had to drive through a field of potatoes in order to reach it, but Mr. Corrigan was glad to accommodate despite this inconvenience.

In those days, few, if any residents of the community carried fire insurance on their buildings and Mr. Douglas was no exception. So the first steps towards reconstruction were undertaken by Lawrence Corrigan and Ned Cullen, who took up a collection from the rural people who contributed as generously as they could. It being summer time and difficult to acquire wood from the forest for the new barn, there is no one living at this writing to tell us where the lumber was cut or who donated it. At any rate it had to be hauled on wagons to a mill at Val Belair, as Fred Lepire’s mill in the Settlement had burned down that summer, and the Hayes Mill in Riviere­-aux-Pins was inoperable due to lack of water.

When harvesting was done, the neighbors all pitched in to build a new barn. The effort led by Mr. Charles Kack, a relative of Mrs. Douglas (whose maiden name was Sarah Kack). The new barn was ready to shelter the cattle before winter set in.

A possible answer to the origin of the fire was put forth. Mr. Douglas had been in Quebec the day before and a friend of his, Mr. Willie Oliver, came to Valcartier with him that day. (The Oliver’s used to spend their summer vacation at Mrs. Brennan’s nearby.) They may have been smoking along the way and possibly dropped a live match on the floor of the vehicle. (Safety matches were unknown at the time.) The express was housed on the threshing floor of the barn and the children were playing in it that evening, A sulphur match, as was common at that time, if struck, would ignite with a burst of flame that could easily cause a small child to panic and thus cause a conflagration.