The Life and Legend of Shannon, Quebec 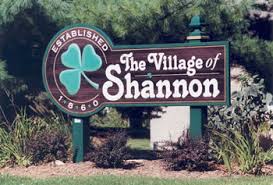 This month, after seven years living in Shan­non, I have moved to Ste-Foy. During those short years, I have made many friends  and have found the Irish people of Shannon always cordially inclined toward the servicemen. In this respect, I dedicate this article to all Shannonites.

Shannon, a municipality situated some twenty miles northwest of Quebec city and independent part of the Parish of Ste-Catherine in Portneuf County, contains about 400 English-speaking residents, mostly descen­dants of the original settlers of Ste-Catherine, who took up land there in the 1820’s.

Although there were Irish in what is now the province of Quebec during the French regime – a book written by Abbe Tanguay lists 130 Irish families among the 2500 families ot New France in 1700 – the true exodus of the Irish from Ireland began in the late 18th century and continued to increase until it reached it’s peak during the potato famine years of 1847-1848 when some one million fled Ireland for America.

This large scale immigration was facilitated during that period by the large lumber trade which had sprung up bringing timber for masts for the Royal Navy from the Port of Quebec to Great Britain. The owners of the vessels engaged in this trade were only too happy to turn the ordinarily profitless return trip to Quebec to good account by filling the holes of their ships with poor im­migrants, chiefly from Ireland who, for a few pounds, could transport their families to the new world.

Among the immigrants of 1820’s were those who settled in Ste-Catherine, Portneuf County. When they left Ireland, the hope of the Irish was to use Canada and Quebec as a stepping stone to the United States, and the majority of them did just this. However, Ste-Catherine’s pioneers were among the number that, being met on the docks by the seigneurs or their representatives who were seeking to attract settlers to their manors, elected to settle in the Quebec area, and so it was in this way that the Irish came to Ste-Catherine and Valcartier, Lac Beauport, Laval, Ste-Basile and other localities in the district.

The present mayor of Shannon, Mr. Eddy Conway, is a descendant of one of the first pioneers. His great grandfather, James Conway, a native of County Kil­kenny, took up land at Lake St. Joseph in 1823 at about the place where the former Auberge des Pins stood. His son, Joseph, farmed in the Pine River District, and it was on the old homestead there that the mayor was living when the area was expropriated to enlarge Base Valcartier.      ­

Other pioneer names still to be found in Shannon are Murphy, Lannin, Neville, McCarthy, King, O’Shea. Kiley. Campbell, Leahy, Stewart, Powell, Donaldson, Bowles, Thompson, Guilfoyle, McGlennan, Maher and Griffin. The Kack, the Corrigan, and the Murphy families were among those who pioneered St.Gabriel de Valcartier. Other names once numerous locally, but which can no longer be found in Shannon/Ste-Catherine were McLaughlin. Mooney, White, Donovan, Donnelly, O’Sullivan, Hackett, Barry, Fitzgerald, Landers, Taffe­, Carrol  and many others. Lake St. Joseph, where summer cottages now stand in profusion was once ringed with farms, the owners of which were Irish. The Whites, Gurriers and Conways are not long gone from there, but where the Shannons, Driscolls, Guilfoyles. etc. once farmed, no one now knows.

Ste-Catherine became a parish in 1832, and the first parish priest was Father Hugh Paisley, a Scotsman by birth. His immediate successors, Fathers Dunn and O’Grady, were Irish-born. Another priest of Irish origin, Father O’Leary, a Native of Ste-Catherine, served the Catholics there in the 1890’s. In the 189O’s, Ste-Catherine also had an English Protestant population, and an Anglican church once stood on the fourth range, nearly opposite to the Oscar Robitaille garage. Ste-Catherine Parish was then almost wholly English-speaking whe­reas it is now 99% French-Canadian.

Shannon as a municipal corporation only dates from 1948. The first mayor was Thomas Guilfoyle who had previously served on the Ste-Catherine council in the same capacity for many years. The School Board of Shannon which ceased to exist last summer, came into being at about the same time.

Until the 1940’s, Shannon’s economy was based on mixed farming and principally on the cutting and sale of wood, and its young men very often tented to leave home in the fall to seek employment in the woods of New Hampshire, Michigan, Wisconsin and elsewhere in the United States. There, their descendants can still be found.

The building of the Quebec-Gosford Railroad (begun in 1869 and completed in 1871 and the first railroad in the Quebec city area to bring firewood to Quebec city residents from Gosford Township, north of Shannon, gave employment and opened up what was heretofore an isolated community. This railroad operated on wooden rails which were sawn from hard maple logs at a mill on  what was later known as the Mill Stream, a tributary of the Riviere aux Pins, now a part of the military base.

The Quebec-Gosford did not operate very long , but its construction was followed by that of the Quenec/Lake St-John, as well as the construction of the Quebec Power plant,  at St-Gabriel. In 1906-07 a branch  from  the Quebec/Lake St-John which followed the old Gosford Road for some distance was built by Mr. A. P. Conway’s father. Its purpose too was to bring firewood to Quebec and it terminated at old Clark Station in the present military base. The establishment of Camp Valcartier (now Base Valcartier) in 1914, while a hardship to many of the Shannonite families, also gave employment and it together with the opening of the Dominion Arsenal (now Valcartier Industries) and CARDE plants (now DREV) played a part and helps explain why the Shannon Irish still remain here and are not yet a memory as are many once flourishing Irish communities in the province. St. Joseph’s chapel was begun in 1943 and completed in 1944. It was first served by Canon Bruno Desrochers, later first bishop of St. Anne de La Pocatiere. Other French-Canadian priests at Shannon, before the coming of the St-Patrick’s Redemptorists, were Fathers Godin and Doyon. Before this chapel was erected, mass had been said for some years in an old building known as  Sam Hughe’s House (the Defence Minister of the 1914­-18 war) and later used as a school. The first chapel in Shannon however, was one which stood near the corner of Dublin and Gosford roads. It was active about the time of the first world War and had among its priests “the late Archbishop Vachon of Ottawa who had been born in St.Raymond and was Irish on his mother’s side.

Thus holds to date in brief the life and legend of Shannon, Quebec, but more lies ahead for this.