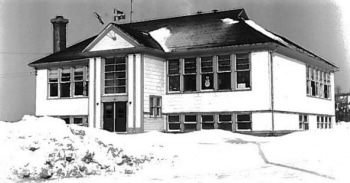 One of the oldest, if not the oldest school was situated at the foot of the Near Mill Hill, later known as the School at Todd’s. Todd’s moved there from the ­Fourth Range in 1864. From then the hill was referred to as Todd’s Hill and the school as Todd’s School. My father, Albert Monaghan, attended school there and he was born in 1861. He used to speak of Miss McGrath. It was a Mixed school, that is attended by Catholic and Protestant children. But there is evidence that there was a school there around 1833.

On the following page will be found a typewritten copy of a photocopy, taken from the Public Archives, Ottawa. It is a school report, November 1833.

I can remember listening to my father and Lower Henry Rourke tell about their school days there. They were almost both the same age. Lower Henry told about his first day in school, Miss McGrath was teaching and he was sitting on Bill Magher’s knee.

Then on the next pages will be found lists of teachers who taught in Riviere aux Pins Catholic School, dating from 1892. The school probably existed long before that.

Also there is a list of the teachers who taught in St. Ignace School,  Redmond Road, dating from 1889.

Then there is a list of some of the teachers in the Fourth Range School.

This school was built around the turn of the century. The school was built by Robert Davidson at a cost of $150.00. This is hard to believe. The ratepayers ­contributed to the furniture of the school. Some of the parents contributed  desks and so on.

There was a Protestant school in Riviere aux Pins prior to 1864. In a letter to his parishioners on his departure in 1861, The Reverend E. C. Parkin, wrote from which I quote : “To know I leave behind a good school which you are kind enough to attribute to my exertions will ever be a subject of pleasing recollection. Ten years ago it was a matter of surprise to find one of the then rising generation who could read God’s Holy Word, now the happy exception is to find one who can not. To your teachers’ untiring attention to your children’s interests you must attribute this success. ” (Mr. Parkins was the Anglican Clergy-man.)

The Valcartier Development which erected the ski center and built Valcartier Lodge, which was later sold to the Blessed Sacrament Fathers in 1954, the Fathers opened a minor Seminary in 1955, which taught the classical course to boys. When I taught there from  1961 to 1971, they had the four high school grades in French. Elements Syntaxe Methode, Versification and two years of College, Belles-Lettres and Rhetorique. They now teach Secondary 1 to V to over 500 pupils, boys and girls. At this writing it is no longer controlled by the Fathers, but it, is still a private school.

From the records of Notary Dominique Lefrançois, transcribed by Gerry Neville, 2011

At a Meeting of the Heads of Families in the School District No. 3 in the Parish of St. Ambroise, North Side of River Jacques Cartier in the County of Quebec called by public notice given at church door immediately after divine service and at the most public place in the said School District, for the purpose of electing School Trustees by order of Curtis Billing, Ensign of Militia held at the Government School House on Monday, the 9th day of July one thousand eight hundred 32.

were duly elected School Trustees for the said School District, to serve until the second Monday of June, one thousand eight hundred thirty four and thence until the election of their successors, provided such election take place on or before the expiration of three months from that date.

On the first of December one thousand eight hundred and thirty five before me the undersigned Notary Public for the Province of Lower Canada residing at the Parish of St. Ambroise of Young Lorette in the County of Quebec and the witnesses subscribed appeared the said Curtis Billing, Ensign of Militia, residing in the Settlement of Valcartier, above named, who according to law, deposited the above Report of the Election of School Trustees for the District aforesaid, depositing officer and witnesses have subscribed their own names with the Notary , the day and year above mentioned after the reading duly made. Two references in margin.

At the bottom of this image, click on the arrow to go to the next pages