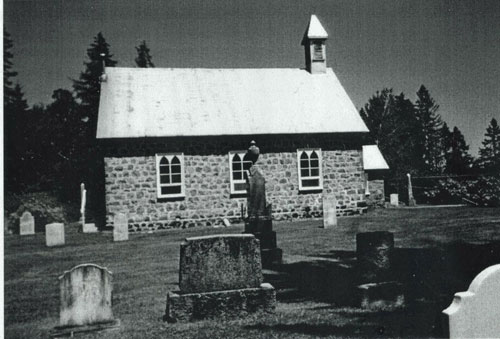 Also known as Church of Scotland

One of the first missionaries to Valcartier was Rev. A. Archibald.  He would have come out to the communities surrounding Quebec City.  In the early days of settlement the congregation had for many long years met and worshiped in homes, then a school room and later in the small wooden buildings that had later answered the purpose of a church.  Before the present Scotch church was built the congregation worshiped in a little school house near the residence of Colonel Wolff.  The following trustees, Adam Leithhead, William Aldcorn and Arthur McBain, date back to 1818.

In the years prior to 1833, King George III of England was petitioned by the people of Valcartier that “two hundred souls need to be saved”.  They requested that a Presbyterian Church be established in the village.  In 1833, that right and privilege was granted and the congregation began its witness that is now in its 164th year.

The Presbyterian Church was a log church built fifty yards from the present stone structure.  On June 19, 1838, the log church was dedicated for public worship by Reverend John Cook of Quebec City.  He had not been in the country for very long.  At the official opening, Reverend Cook, on behalf of the congregation’s interest presented the Pastor of the church with a pulpit gown and bible, and Mrs. Shanks, the wife of the pastor, with a table and a hymn book.  On the same occasion, Mr. James Dean presented the church with a bell.

John Neilson donated a parcel of land on February 1, 1848 for the site of the church.  On September 20, 1848, the Neilsons deeded adjoining property to the congregation to complete the block of land overlooking Lake Ferry.  The first church was made of wood and unfortunately burnt.  A new stone church was built in the early 1850s and is the building that is still in use today for worship services.  A graveyard is part of the property with gravestones dating back to the 1870s.  Prior to that, wooden markers were used and have been lost to time.  The stone church was dedicated in 1859 by Reverend David Shanks, who witnessed the dedications of both the log church and the stone church.

The Honorable John Neilson is buried in the cemetery.  He died in Cap Rouge and the funeral was held in St. Andrew’s in Quebec City.  After a  three day cortege ride, with three hundred mourners following, he was buried in Valcartier, at St. Andrew’s Presbyterian Church.

There have been many ups and downs for the congregation over the years.   In 1925, when the United Church was founded, about half of the congregation went down the road and formed St. Andrew’s United Church.  This action split many a family for generations.  However, they now enjoy a shared youth group, Vacation Bible School, and support each other’s activities.

From 1925 to 1956, the congregation was served by various student ministers, when available.   In 1956, the Reverend Owen Shannon came to be the editor of the Quebec Chronicle Telegraph, lived in the manse and served the congregation until 1964.  After many different arrangements for ministers – Rev. Rowat, a retired minister; the Salvation Army, for ten years; summer students; and one ordained minister – the congregation became a Married Student Charge.  That is to say that while a student minister studied at the Presbyterian College in Montreal, their family stayed in Valcartier and on weekends the student would lead services and perform pastoral duties. The Rev. Tom Saulters, now in Dalhousie, New Brunswick and the Rev. John Hopkins, now in Campbellton, New Brunswick, were followed by the Rev. Bob Sim who after finishing his studies was called in 1991 to be the congregation’s full time minister.

Since the 1925 time frame, it has been a struggle t support the ministry, but through persistence and faith, the people have established a long and caring ministry to the people of Valcartier and the environs.  “Our witness began in 1833 and continues today” and we pray that God will see fit to extend that witness for many years to come to the people of the “the Church on the Hill”.

Records from this church for baptisms, marriages, and burials have been kept from 1833 to the present.