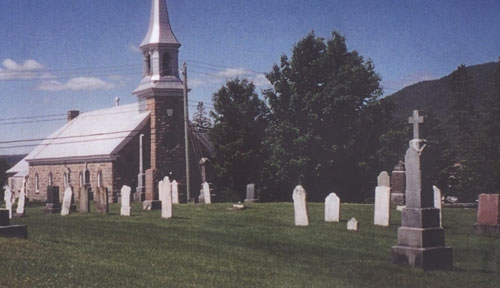 The Roman Catholic Church of Valcartier had its beginnings in 1833.  Father Hugh Paisley, the priest from the nearby community of Ste-Catherine, traveled to Valcartier to perform services in a small chapel built by the Irish settlers.  The first resident priest was Father Michael Griffiths, born in May 1793 in Donegal, Ireland and died on the 27th of October in 1849. Father Griffiths is buried in the cemetery attached to this Church.  He was ordained a priest in September 1831 and was educated in France, as at that time there were no Catholic seminaries in Ireland. He made all his entries into the Valcartier parish registers in French.

In the years 1838-9, a small wooden chapel was erected across the road from the present church, next to the cemetery.  Andrew Stuart, a lawyer, donated the land so that the people could build the chapel. The construction of the first Catholic Church began in the year 1852 and completed in 1853.  It was built from red granite, which was purchased from Mr. Edward Maher’s stone pit, located a few kilometers north in Riviere aux Pins. The Neilson family donated the lot for the church under the condition that a yearly mass was celebrated in honour of Marie Ursule Pelgrie Hubert, the wife of John Neilson.  This yearly mass was to take place every August into perpetuity. (Note: Marie Ursula was Catholic, her husband Presbyterian). Marie Ursula Hebert is believed to have been buried under the present church and there is a plaque commemorating her memory inside the church.

In 1894, Margaret Neilson, daughter of John and Marie Ursula, donated additional property valued at four hundred dollars.  The land was donated on the condition that a “messe basse” would take place each year in honour of herself and her family.

Established in 1850, a mass in perpetuity to be said in the Valcartier Church in the month of August. Foundation de Madame John Neilson (widow) and her children.

The construction of a new church began on April 13, 1911 and was completed in 1912.  Unfortunately, the church minutes do not indicate why there was a need to build a new church.  Father Michaud and the wardens of the church borrowed $3000 for the mortgage from Edouard Hamel, a farmer of Tewkesbury. The vestry was constructed with the wood taken from the chapel of 1838.  The altar that is presently in the church is the same one that was in the old wooden chapel. It is said to be the oldest altar in the diocese of Quebec.

In 1824, when the population of early Valcartier was 312 people, there were 216 Catholics listed in the Census.

The last resident priest left in 1958 and the church is now serviced by a priest from outside the community.

The parish was named after the patron saint St. Gabriel and the name Valcartier means Valley of the Jacques Cartier River.

Valcartier had not built a Chapel until 1838. What is interesting is that the Valcartier Congregation had a “Pew Lease” for members of the Congregation. The pews were leased mostly by couples for the lifetime of the husbands and wives and the pew lease would revert back to the Church when both were deceased. The Pew Leases were done as a Contract with a Notary. In this case, the Notary was Dominique Lefrançois. Patrick Liddy was the person elected to collect the money for the Pew Leases. Below is a list of Pew Leases that are in Dominique Lefrançois’s records for 18 March 1838. I suspect there are more (because Patrick Liddy is not in the list himself) but I have not searched through the list of the notary’s records yet.  I did look at the microfilm records for Charles Fitzpatrick and the two Cassins, Michael and Denis. The records give the husband and wife’s names, the Pew Number, the Amount paid.    Charles Fitzpatrick and Febby (Phoebe) Bethel had Pew# 6.  Michael Cassin and Margaret Kelly had Pew #4.  Denis Cassin, and Mary Landrigan had Pew# 5.

Notes about the parish of St Gabriel Valcartier by Leonard Conway

Old  presbytery was demolished in June 1973

Organ purchased from the Marist Brothers in Beauceville Nov 30th 1997.

Arrival of the Marist Brothers Jan 1945 (Opening of a Scholastic ate normal school).

Terrazzo floor installed in the church May and June 1950

Sacred heart of Montmarte Borne on the clouds installed in 1950.