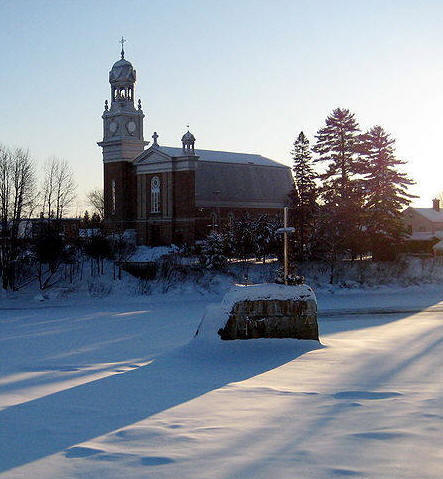 During the early colonization of the Seigniory de Fossambault, the members of St. Patrick’s Mission, (the Irish Catholic  settlers), had to go to the closest parish for religious services.  This parish was St. Augustin, located south in the Seigniory de Gaudarville.  However for special masses or celebrations, the parish priest would travel by horse ad buggy for miles over the bumpy roads to Ste-Catherine.  The mass was celebrated in the seigniorial mill, which on the occasion, served as a chapel.  The first Catholic Church was built in 1832 in Ste-Catherine.  It is believed to have been made of fieldstone and situated on the banks of the Jacques Cartier River.  On January 6, 1910, the night o of the Epiphany, the church caught fire and burned to the ground.  Construction on a new church commenced soon after and was completed in 1911 under the leadership of Father Jolicoeur.

There were Irish priests stationed there until about 1871 and English services held to about 1944.  In 1944, the chapel in Shannon was built to service the 262 Irish in the community.  The priest came all the way from St. Patrick’s in Quebec City and usually it was a different priest each week.   Long before St. Joseph’s Chapel was erected, many of the parishioners were obliged to attend mass in either Valcartier or in Ste-Catherine.  During the First World War, masses were performed in an old building at the corner of the present Dublin and Gosford Roads.  Father Vachon served at this chapel during this period.   By the late 1920s and early 1930s, a priest came from Valcartier to perform Sunday mass in one of the old hospitals on the army base during the summer months.  In 1932, masses were held in a two-story house, located in the same area as the present chapel.